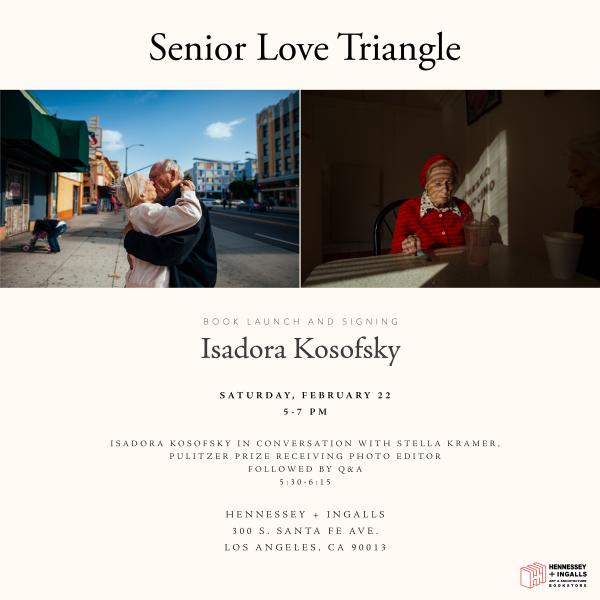 Join us Saturday, February 22nd at 5:00 pm for a Discussion and Book Signing with ISADORA KOSOFSKY in conversation with Stella Kramer for the book: "Senior Love Triangle".

Photographed in Los Angeles, Senior Love Triangle documents three senior citizens in a romantic conflict. Jeanie, age 81, and Adina, age 90, share William, age 84, as a partner and companion, often all spending time together. In his late 70s, Will formed a relationship with Adina. Then, Will moved into another retirement home where he fell in love with Jeanie. Since Will did not want to choose between Jeanie and Adina, they formed a trio. While pushing against sociocultural norms about senior citizens, the connection between Jeanie, Will and Adina also reveals ageless needs, anxieties and contradictions. Renowned documentary photographer Isadora Kosofsky met Jeanie, Will and Adina when she was 17, chronicling their moments of adventure, desire and loneliness with an empathetic gaze for years. Senior Love Triangle, published widely, multi-award recipient, center of a TED Talk and basis for a feature film, is seen as a revolutionary visual work on intimacy and aging, questioning the universal nature of love and monogamy. "There are many different kinds of love," says Adina to Kosofsky. Through photography and writing taken from Kosofsky's notebooks, including conversations and reflections, Senior Love Triangle book is documentary storytelling that viscerally immerses us in the lives of these three people where it is impossible not to reflect on the complex nature of our own relationships.

Isadora Kosofsky (b. 1993) is an American documentary photographer, photojournalist, and filmmaker, who began photographing at the age of fourteen. Induced by the loss of her grandmother, she started documenting individuals in hospice care. At the age of 16, she worked on a photo reportage in a Romanian youth prison, becoming the youngest journalist to ever work in a penal setting. Kosofsky has contributed to the NY Times, TIME, the New York Times Magazine, the New Yorker, The Washington Post, Stern, Le Monde, M le Magazine du Monde, GEO Germany, Paris Match, The London Sunday Times, The Guardian, Slate, Internazionale, and many others. She is the recipient of the 2012 Inge Morath Award from the Magnum Foundation for her multi-series work on the aged. She was nominated for a 2016 Lead Award (German Pulitzer) for her long-term documentary about a senior citizen love triangle. She is a recipient of a 2018 Grant from the Pulitzer Center for Crisis Reporting for her ongoing work on girl survivors of complex trauma. Isadora Kosofsky is a TED Fellow, part of a network of 450 global change makers, and gave a talk at TED 2018 in Vancouver.

Thanks for signing up!